Learn everything you need to know about indoor air quality. Get insightful information from leading experts in this field—all curated in one place.

Everything You Need to Know about Particulate Matter

What Particulate Matter Is, Why It’s Sometimes Hazardous, and How to Reduce Its Adverse Effects

Indoor air quality has become increasingly important for many businesses and private residences. Given an increased awareness of how the air we breathe affects our overall health, here’s what you need to know about one important element of indoor air quality: particulate matter.

What Is Particulate Matter?

Some particulate matter, such as certain kinds of soot, dirt, or smoke, can be seen with the naked eye. Others are microscopic and cannot be perceived without equipment. 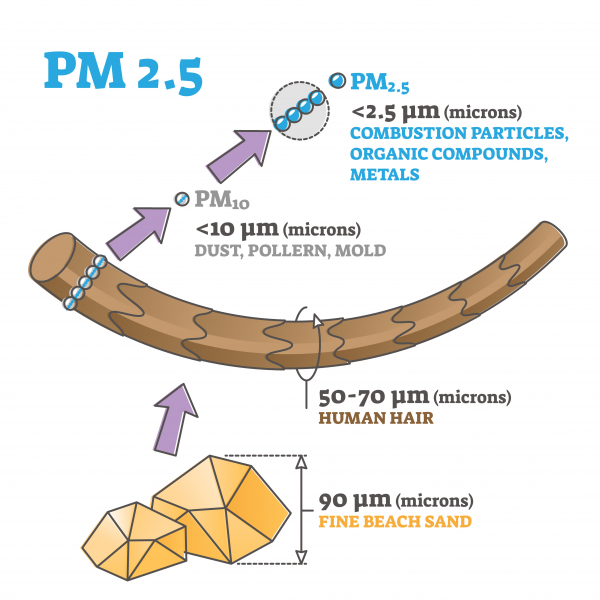 Not sure how large a micron is?

For context, a single human hair is typically anywhere from 50 to 70 microns.

Particulate matter is around us all the time. It’s in our indoor air, and it’s in the air we breathe outside. It includes all the following:

Particulate matter can either be directly emitted from multiple sources or formed through atmospheric reactions. For example, wind might disperse dust or pollen. This is the direct form of emission known as primary particles. Particles can also enter suspension when a vehicle, power plant, industrial building, or the like emits material that then forms particulate matter with gaseous pollutants. These are known as secondary particles.

With Particulate Matter, Size Is Everything

Some particulate matter is not harmful at all; other types can be extremely hazardous. Determining this has a lot to do with the size of the individual particles. The smaller the particle, the more likely it is to be associated with health concerns.

Particles that are larger than 10 microns are not usually of significant concern. These particles can, however, still irritate eyes, noses, throats, and airways.

Smaller particles, particularly those of 2.5 microns or less, present the most significant health concerns. These particles don’t just irritate you on a surface level. They are small enough to lodge into your lungs or even to enter your bloodstream.

The effects of particulate matter exposure are primarily seen in the heart, lungs, or both. These effects can range from decreased lung function and worsening asthma to irregular heartbeat and premature death. 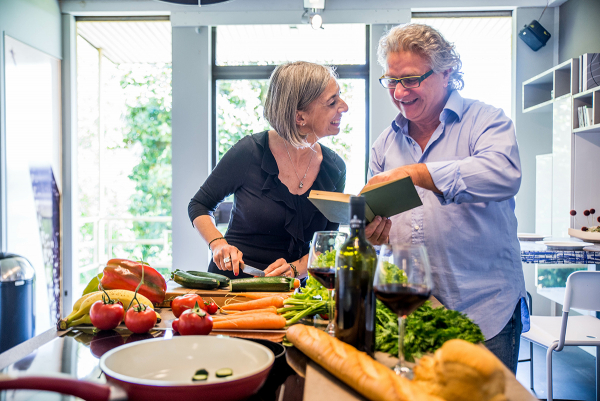 Those most at risk are people with preexisting heart or lung conditions. This includes asthma, COPD, and many others. The elderly and very young children are also both more susceptible to the negative effects of particulate matter.

In addition to the size of the individual particles, exposure time also plays a big role in the net health effect. Long-term exposure is more likely to cause harm like decreased lung function or chronic bronchitis. Short-term exposure is linked to the triggering of asthma attacks, acute bronchitis, and heart arrhythmias.

It is important to note there is no definitive or reported link between particulate matter exposure and negative health effects in otherwise healthy adults and healthy children. There might be some minor irritation, but this is usually temporary and not critical.

It’s also important to remember that physical activity can exacerbate the effects of particular matter because exercising causes you to breathe deeper and faster. If you know air quality is low—from forest fire smoke or any other source—make sure to limit outdoor activity.

Particulate matter can also be detrimental to the environment itself. Increased particulate pollution contributes to all the following:

Another concern related to particulate matter is its role in virus transmission. While this is obviously a concern during a global pandemic, viruses are always present, making this relationship relevant at any point. 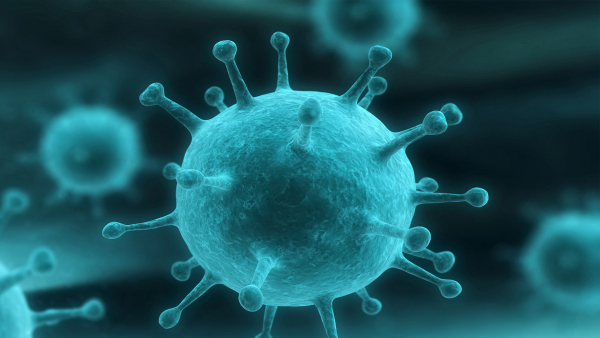 In the specific case of SARS-CoV-2, a correlation has been made between high levels of particulate matter and both transmission rate and case severity.

Who Can Benefit from Particulate Matter Mitigation?

Anyone can benefit from reducing the amount of particulate matter in an indoor space. This includes any of the following:

How to Reduce Particulate Matter

Whether you’re a private homeowner or you’re in charge of a commercial space, it is possible to reduce the amount of indoor particulate pollution. The EPA recommends several best practices for reducing particulate matter. 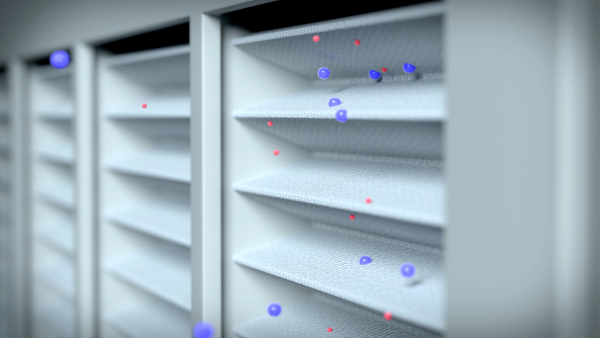 You can also upgrade your HVAC filters to MERV-13. These have been shown to remove greater than 85 percent of particles between 1 and 3 microns. 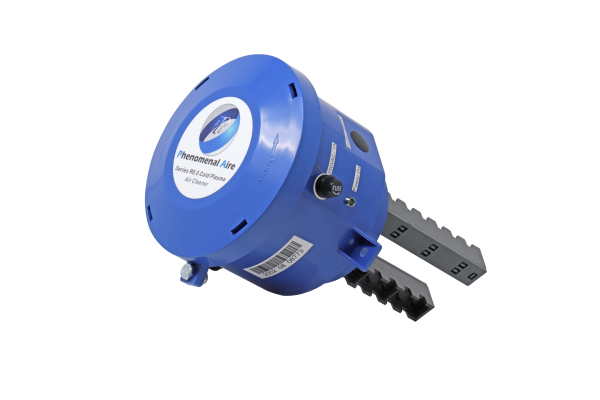 Another ASHRAE-condoned solution is to “[c]ombine filters and air cleaners to achieve MERV 13-equivalent or better levels of performance for air cleaning.”

One way to do this is by pairing a more standard MERV-8 filter with an HVAC-installed air-cleaning system, such as Needlepoint Bipolar Ionization.

Why would you want to do that instead of simply using the MERV-13 filter? It has to do with cost and energy efficiency.

Testing done at a global hospitality chain combined Needlepoint Bipolar Ionization technology with a MERV-8 filter and compared this to a MERV-13 filter alone. The filter and air-cleaning technology combination operated at 70 percent efficiency, which equaled or outperformed the standalone MERV-13 filter. It did this without the additional energy requirements or extra strain on the HVAC system. 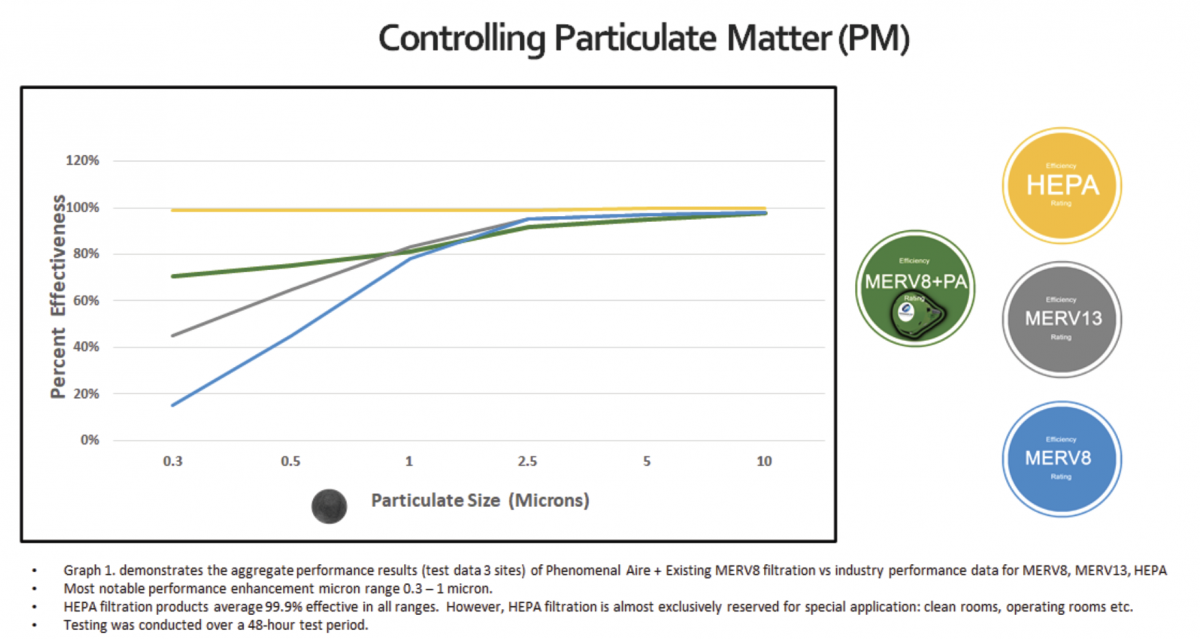 Have Questions about Particulate Matter Mitigation?

Are you a homeowner who’s interested in reducing the amount of particulate matter in your private residence? A business owner looking to improve the air quality in your commercial space?

Reach out today. We’re always happy to answer your questions!