Everything You Need to Know about Particulate Matter

Learn everything you need to know about indoor air quality. Get insightful information from leading experts in this field—all curated in one place.

The American Lung Association has released its 2022 State of the Air Report.  Our blog contains excerpts of the report’s short-term particle pollution trends.  To read the full report visit https://www.lung.org/research/sota

More than 63 million Americans live in counties with F grades for spikes in daily particle pollution.

In the years 2018, 2019 and 2020, some 63.2 million people lived in the 96 counties that earned an F for unhealthy spikes in particulate matter air pollution. This represents close to 8.9 million more people over a larger area than in last year’s “State of the Air” report, and more people than in any of the last seven reports—since the current version of the Air Quality Index was adopted.

Even compared with the past two years of “State of the Air” reports—in which many cities and counties experienced their highest weighted average number of days ever reported for fine particle pollution—results this year were again worse throughout much of the western U.S.

Among those cities ranked in the worst 25, more had poorer air quality than showed improvement, with the weighted average number of days with high levels of fine particle pollution worsening on average by 3.6 (from 12.9 to 16.5), a 28% increase.

Eight cities on this list posted their highest-ever weighted average number of days with unhealthy levels of particle pollution and two, Fairbanks, Alaska and Redding-Red Bluff, California, did so for their third report in a row.

Twenty of last year’s worst 25 cities remained listed among the 25 worst in this year’s report, though their relative ranks shifted around quite a bit. The five cities new to the list in 2022 were Salinas, San Luis Obispo and San Diego in California; Boise, Idaho and Bellingham, Washington.

Missoula, Montana; El Centro and Santa Barbara, California; Lancaster, Pennsylvania and Las Vegas all moved off the list of worst 25 cities. However, in two of these (Lancaster and Las Vegas), the air quality actually got worse. In fact, because the weighted averages for fine particles worsened so much generally, all five of these cities, plus Denver and Fort Collins, Colorado, posted weighted averages for particle pollution in the 2022 report higher than that of the 25th-ranked city in last year’s report.

Of all 25 cities, only one, Salt Lake City, posted its best performance ever for this pollutant—as it had in last year’s report. Its rank improved to 20th worst in this year’s report, from 17th last year, and 7th worst two years ago.

In “State of the Air” 2022, only one city among the 25 worst for short-term particle pollution is not in the western U.S. Pittsburgh again showed improvement and moved to 22nd worst in this year’s report, yet it remained the worst metro area in the country east of Utah for this pollutant measure.

All but one of the 25 worst cities for short-term particle pollution are in the western U.S.

Of the remaining 24 worst cities, 11 were in California, nine in the Pacific Northwest and four in the Southwest. This continues a shifting geographic trend driven in large part by the increasing number and size of wildfires resulting from climate change-induced heat and drought.

Extreme Pollution Levels on the Rise

In the last several years, Americans have been seeing media coverage of catastrophic wildfires in the western U.S. Images of iconic cities like San Francisco bathed in an eerie orange glow that darkened the sky in the middle of the day were reminiscent of those deadly air pollution events of the mid-twentieth century that prompted the passage of the Clean Air Act. 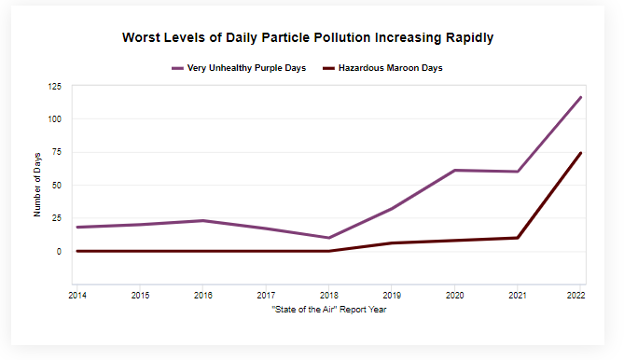 Wildfires in the western U.S. are not only increasing the number of days and places with unhealthy levels of particle pollution. They are also increasing the severity of pollution, resulting in a sharp rise in the number of days designated as either purple or maroon. These are the levels on the Air Quality Index that carry the strongest health warnings. On purple very unhealthy days, “The risk of health effects is increased for everyone.” On maroon hazardous days, a health warning of emergency conditions is issued, saying, “Everyone is more likely to be affected”.

“State of the Air” 2022 includes 26 counties across six western states where levels spiked to “hazardous,” the highest “maroon” level in the Air Quality Index, on a total of 74 days, far outstripping the ten such days in last year’s report. These counties are home to 4.5 million people.

During the three years covered by the report, 116 “very unhealthy” or “purple” air quality days were recorded in 47 counties across eight states, home to some 34 million people. This was almost twice the number of such days recorded in either of the previous two reports, and more than ten times as many as were reported in “State of the Air” 2018.